His honor, Prof. Henderson, has in reality arisen in the service of the Kingdom. The fruits of this service are eternal bounty and everlasting life. Through the graces of God do I cherish this hope, that he at every moment will receive a new confirmation.

s far as we know the first Baha’i in Memphis was Professor George W. Henderson. He became a Baha’i in Nashville in 1915 through Hand of the Cause Mr. Louis Gregory. He moved to Memphis a year later in 1916. Based on a newspaper article written about him, he came to Memphis with two used typewriters and less than $3 in his pocket. He opened a Business School for young black girls which was the start of George Henderson Business College in Memphis. Baha’i record indicates that Louis Gregory visited Memphis at least four times during 1917, 1919, 1929, and finally 1931 when he teamed up with Willard McKay to form an interracial Baha’i Teaching Team to travel throughout the deep south.

Following are extracts from several sources regarding early history of the Faith in Memphis:

ouis Gregory met Henderson, who was the head of the Business Department of Roger Williams University, (in Nashville, TN) who became deeply interested in the Baha’i Faith and later (became a Baha’i) played an important role in establishing a community in Memphis, TN.1

onetheless, by 1920 or so, Baha’is traveling to the South were increasingly likely to find “many scattered believers,” as Louis Gregory put it in Star of the West, ” ‘ and vastly more sympathize with the Cause as far as they understand it.’ ” One strategic point of activity was Memphis, where George Henderson had moved shortly after becoming a Baha’i and had established a successful black business college. The Faith was well-received there, and many students and teachers embraced its principles. In September 1917, Gregory reported that the Memphis Baha’i community consisted of sixty people: “3 white {and} 57 coloreds.”  Most of the black Baha’i’s (most likely just people interested) were introduced to the Faith through Louis Gregory’s public speeches and follow up work done by George Henderson, and most likely they were associated with the business college. It is not clear who the 3 white Baha’i were? But nevertheless, because of George Henderson and Louis Gregory many black people were attracted to the Faith. Certainly, Hand of the Cause of God, Louis Gregory was extremely instrumental in developing the black group in Memphis through correspondence encouraging George Henderson to keep teaching the Faith. He wrote to Joseph Hannen during a visit to Memphis two years later:

Henderson is the ‘teachingest’ busy man I ever saw. He seems to take some time to mention the Cause to everyone he meets. In this way he has interested a number of whites whom he meets in a business way, some of whom have attended the meetings. With all the eight teachers in his school Baha’i, the students find the atmosphere full of it.

A short time later “the entire faculty and student body” addressed their first letter to Haifa in 1919 to Abdul-Baha.

he development into a functioning Baha’i community activity was slow, however. Distant from the mainstream of Baha’i activity, the group depended heavily on George Henderson, who had many other interest and responsibilities competing for his time. Moreover, for many years Louis Gregory provided the group’s only contact with other Baha’is. In 1929, after a long period during which neither he or any other Baha’i visited the college, Mr. Gregory returned to find that Henderson was away and that the group had become relatively inactive in its isolation. Yet old ties were soon reestablished, and “many opportunities to speak to groups, schools, churches and individuals” were soon presented to him. Informed of his old friend’s arrival, George Henderson returned quickly to Memphis. The close relationship between them was so completely reconfirmed that Mr. Gregory wrote a friend of his desire to go on pilgrimage to Holy Land with George Henderson. Meanwhile, the Baha’is at the college addressed their second letter to Haifa in 1929, this time to Shoghi Effendi.

r. Gregory’s efforts over a period of more than twenty years finally culminated in the formation of the first Spiritual Assembly of the Baha’is of Memphis, of which George Henderson was elected a member, in April 1941. After Mr. Henderson’s death in 1944, Louis Gregory published a tribute to him in The Baha’i World, describing him as a loved and respected public figure whose professional concerns dominated his life yet were always related to his beliefs as a Baha’i.2

he next most significant event in Memphis was when Howard Colby Ives and his wife Mabel came to Memphis around 1939. The following is an exact letter written by our dear Virginia Sims about the early them and early teachings in Memphis:

On 30 October 1921 Martha Root addressed a group in one of the hotels (in Atlanta) before leaving for Memphis, Tennessee. There she spoke several times at the Henderson Business College, a forward-looking school devoted to educating black students in professional skills, as well as arts and sciences. It was the same institution that Louis Gregory had spoken at a few years earlier. The college was the fruit of Professor George Henderson, its director, a multifaceted man, a gifted speaker, a musician, and a Baha’i. Abdu’l-Baha was aware of his work and had sent him a letter praising his vision and effort.3 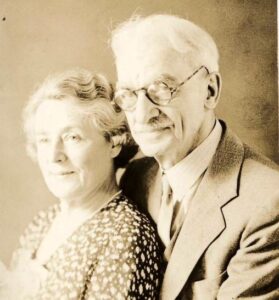 n late 1939 Howard Ives and his wife, Mabel, moved to Memphis to teach the Faith. He was asked to speak from the pulpit several times and as a result there was much interest generated. Arthur Bruce and his wife attended many meetings. The large auditorium at Lemoyne Owen College named for him was built after this time as an expression f his work for good will between the races. (He thought there should be at least 100 white Baha’is before you tried to integrate the races). The Bruce Lumber Co. of Memphis was world famous for hardwood lumber. The Kellers, another prominent family, also pillar of the church were interested as was our dearly beloved Johanna Zimmerman who became the main stay of the Baha’i community in Memphis (native born). She became our most efficient secretary for at least 25 years and as a result of family connections furnished free our Baha’i Center at the most convenient location then Cleveland and Madison Avenue (Crosstown as it was so well known then). Her brother-in-law was a very successful businessman and it was in his office that we held all our meetings for 15 – 20 years. This at a time when integrated meetings were not welcome anywhere and MSU was still only white. (now back to the beginning).

abel Ives had much experience as public speaker and also deepening classes-very popular at that time. She began at once to hold classes for all interested contacts. There were notices in the paper and at least one person responded to those- Grace Bogan- the person who later introduced me to my future husband. Mary Barton of Wilmette, a woman of means, came down for 6 months or more to assist Mabel and set up an apartment. (Baha’u’llah says affairs depend upon means) on Stonewall the best midtown area of that time and convenient for all interested persons.

n 1940 there were a Black Baha’i Community and a White Baha’i Community, and they were functioning separately. Then came the hard work of administration by uniting the two groups which for 6 or 8 months were unaware of the others existence. For this another type person was called to assist in this most vital part of all. Uniting the two races in a lawfully segregated society. It was an almost impossible task at that time. Doris McKay of Jamestown N.Y was the one called upon to accomplish this task. Her husband Willard McKay and Louis Gregory came south on an integrated teaching team in December 1931.4

inally, in 1941 Doris McKay was able to bring the two groups together and form the first Local Spiritual Assembly of Memphis.